Yes, Captain--you do have to pay taxes on those gifts. 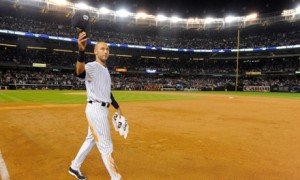 After 20 seasons in the major leagues, Derek Jeter, the New York Yankees shortstop and longtime captain will retire. He played his final game at Yankee Stadium last Thursday in what was surely a storybook ending. After the Yankees blew the lead, Jeter played the hero, again; he knocked in the game-winning run in the bottom of the 9th inning. His final at-bat at Yankee Stadium ended his career with a game-winning hit.

This past baseball season has been a celebration of all that Jeter has done for Major League Baseball and the New York Yankees. Opposing teams have showered him with gifts on his "farewell tour." Each team gave him gifts unique to their geographic location and based on their many experiences of playing against him. To name a few: the Orioles gave him a naval captain's hat and a bucket of Maryland crabs; the Indians gave him a pinstriped electric guitar from the city where the Rock & Roll Hall of Fame calls home; the Mariners gave him a seat from their old stadium where Jeter made his debut on May 29, 1995.

Despite all of his send-off gifts being "free," the Captain must be prepared to pay some hefty taxes on the gifts. In total, the Chicago Tribune estimates that the gifts are worth $33,000 which would mean he could owe around $16,000 in state and federal taxes. Jeter can certainly afford that $16,000 since this year he is making $12 million and over the course of his 20-year career he has made over $265 million.

Lesson to be learned: not even the Yankees' Captain, the man who helped them win 5 championships, can get out of paying taxes in New York State.