The Wealth Gap--or is it the Stock Gap?

Despite improved economic conditions, the Federal Reserve recently announced that the gap between America's rich and poor has widened. According to the Fed's Survey of Consumer Finances the average pretax income for the wealthiest 10% of U.S. families rose 10% in 2013 from 2010, but families in the bottom 40% saw their average inflation-adjusted income decline over that same period. Last November, Fed Chairwoman Janet Yellen, stated that widening inequality is a "very deep problem" but many of the contributing factors are beyond the control of the Federal Reserve.

An article posted by Robert Frank of CNBC claims that the widening gap can be attributed to stock ownership. Stock ownership for Americans topped in 2001 and has been slowly declining since--a major reason for the growing inequality gap. America has the lowest level of stock ownership in 18 years, yet stock ownership among the wealthy is at all-time highs. For those Americans that have stayed with stocks they have done exceptionally well in this most recent recovery. Frank concluded his article well, "Stocks have helped the rich get richer in this recovery. But they have also helped the less-rich get richer."

Investing in quality companies over the long-term is an excellent way to build wealth. Just take a look at the chart of the S&P 500 since September of 1994. 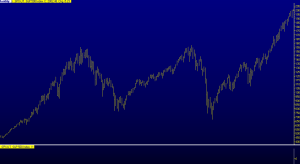